The Pursuit of Happyness?

On Wednesday night, after our friends Kevin and Marissa had come over for dinner, Heidi and I had a hankering for a movie. So, while I washed dishes, Heidi cruised over the McDonald’s Redbox. She returned with The Pursuit of Happyness, a movie we had both heard was good. It was . . . interesting.

The Pursuit of Happyness has great acting (Will Smith and his son where fantastic) and kept us interested the whole time. On the other hand, the movie just kept heaping so many bad things upon the main characters that it started to get painful for us as viewers. Also, the ending was so abrupt that I felt that we did not get any payoff for the pain we suffered. Just a couple shots of them being happy would have sufficed. The final words on the screen did not tell us much about what happened to them after the events of 1981. After the journey we took with them, there was no proper ending.

Here is my biggest beef with this and other “inspired by true events” movie. (Spoiler alert!) The movie was based on the fact that there was a guy named Chris Gardner and he had a kid, lived in San Francisco, and got a job. Almost everything else that happened in the movie was false. Chris was married, but cheated on his wife twice, the second time resulting in his son’s birth and his leaving his wife for the child’s mother. During that time he was a heavy drug user (including Cocaine and Marijuana) and a drug dealer (until a gang scared him from that habit). He did go to jail, but it was for hitting his girlfriend, not parking tickets, though they kept him twelve days for the parking tickets. The IRS never took the money from his bank account, he never solved the Rubic’s Cube, and he never sold bone density scanners. He did have another child with his girlfriend and then he left both children with her while he moved to New York City for two years after he got his job. Finally, the internship paid $1000 a month, not nothing, and they took everyone who passed the test, not just one out of 20. To sum it up, the movie was pure fiction about a man who was mostly a lowlife. How disappointing.
No comments:

Last night Heidi and I decided to take advantage of some nice weather for an evening walk. We took the footbridge over 35W and followed 24th St to Hennepin Ave before turning back for home. As we walked we admired the unique houses of the Uptown neighborhood and did some people watching. After we turned around and headed back to our house, I thought to myself how odd it was that we had not been asked for money yet. In the next 15 minutes, we were asked twice. Along with that morning, when we were asked for money in St. Paul, that made three requests. I always feel bad turning people down, but cannot accommodate everyone’s request. Along with that, it is almost impossible to discern viable requests from professional panhandlers. I guess I am jaded from living in the city. After 10+ years of city living, my idealism has faded. I miss it.

On Saturday, I participated in an epic 27 hole round of Disc Golf with Dan, Brian, and Robbie at Silverview Park in Mounds View. As usual, Dan mopped the floor with us, but Robbie, Brian, and I played a close game until the end. The final scores were Dan at -6, Robbie at +4, me at +7 and Brian at +9. The three of us played a closer game than it appears from the final score. I had a great time playing with those guys.

How cool was that?

Heidi and I returned last evening from Warsaw, Indiana, where we were attending my nephew’s wedding reception. (That will have to be a whole other blog entry.) After dropping off my aunt Sandy, who rode back with us, we went to return the car we were driving to Heidi’s mother, Lyn. She had graciously let us take her car to Indiana since, unlike my car, it has AC, cruise control, and a working speedometer. We met her at work and got to talking in the parking lot and she suggested we grab some dinner.

We ate at a Mexican restaurant on Central Ave, near 694, but I cannot remember the name and don’t feel like looking it up. The food was pretty good and we had a great conversation. When it came time to get the check, the server told us that someone from another table paid for our dinner. Evidently a man sitting at a table near ours decided to bless us. We do not know if it was someone we know or just a complete stranger. None of us remember who was sitting around us and none of us recognized anyone that we knew walking by. If it was anyone who reads this blog, thank you.
1 comment:

Kevin Costner movies are hit and miss. On one hand, there are terrible films like Revenge, Waterworld, and 3000 Miles from Graceland. Yet, he also made Dances with Wolves, Robin Hood, and Open Range. In my humble opinion, Open Range is his best work. The story is about a group of cowboys who are taking a herd through open country and get waylaid by a cattle rancher’s goons. The cowboys, knowing that they would never be able to escape the area with their herd intact, fight back. Along with some great action sequences, there is a sweet love story and some fantastic dialog. The lead characters, played by Costner and Robert Duvall, are men of action, not words. The dialog between them is sparse, but meaningful. The movie builds up slowly in a way that makes you care about the characters, so that when the final conflict comes, there is an emotional investment. Open Range carries an R rating, but the fight scenes are not graphic and the language was more on par with a PG-13. This is the best modern western in years.

Great scenes:
- When Boss brings the Marshall “breakfast”.
- During the gunfight when Baxter threatens the townsfolk. One of the wives yells back at him and then she looks at her husband to do something.
- The interactions of Charley and Sue in the garden.

Great line: Mack: Shame what this town's come to.
Charley Waite: You could do something about it.
Mack: What? We're freighters. Ralph here's a shopkeeper.
Charley Waite: You're men, ain't you?
Mack: I didn't raise my boys just to see 'em killed.
Charley Waite: Well you may not know this, but there's things that gnaw at a man worse than dying.
No comments:

Weekend at the cabin 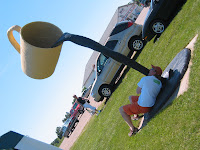 It's kinda hard to see, but the coffee cup is my favorite. 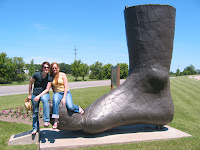 This past weekend we were priviledged to spend a glorious weekend up at a friend's cabin in Vining, MN. It was wonderful, that's got to be one of the best things about MN. Having friends with cabins!

There is an artist in Vining to makes fantastic sculpture out of scrap metal. Here's a toe. I love it! I don't really get into art too much, but if you can consider this art, I totally dig it.
No comments:

I (Tim) have been meaning to write some more meaningful blogs about the cool stuff going on in our lives, but have not had much time. Instead, I have another short entry about the Transformers movie.

The new theme song to the Transformers movie can be found through this link: http://www.myspace.com/mutemath

The band Mute Math, which recorded it, is a Christian band who has seen some pretty good mainstream success. They must have felt really silly singing the word "Decepticon". At least they will be able to pay the mortgage this year.
No comments:

We have had 5 weddings to attend this spring and while it's been busy, it's been super fun! Three down, 2 to go! My little brother gets married TOMORROW and i will post photos of that fun later on. Last weekend we attended a very fun wedding of a co-worker of mine from Starbucks, someone who has become a very dear friend. Petra and JG came with us to Wisconsin for the weekend and we had a ball!
Kevin and Marissa
No comments:


We took our nephews to Chuck-E-Cheese a while back and we were all wearing Crocks, isn't that fun!
No comments:

When we have company over, Tim does much of the cleaning and picking up right before they come as I am usually cooking. He likes to lay out my pajamas on the bed and then when we give people a tour, they see them. Weird. This time, my pajamas were prego. (Translation: pregnant.) Weird.
2 comments:

After much coaxing, Tim has finally decided to let me start cutting his hair. Here is the before of the second time I cut it. You will have to let us know what you think when you see him!
No comments: