This time I, Heidi, am doing a movie review! I know, I know, we're switching things up a bit. Over the weekend, we rented the movie Bella. Wow, it was great. If you rent one movie all summer, I think it would do your soul well to rent this one. I think it's an independent film......I never remember director's names, but either way, it was a great film. It got a lot of press in Catholic circles for it's strong pro-life theme, and I believe it received good reviews as well. The story was touching, the acting was top-notch, and the message was solid. If you view life and family as precious, go see this movie. The main guy in the movie made it big in Central America as a soap star. He re-discovered his faith through the Catholic church and wanted to make a movie with a worthwhile message that was honoring to his faith. Mission accomplished. I almost want to say that if you didn't like this movie, something is wrong with you...but that's offensive. So I won't say it. :)

Just go rent the movie! Movies like this deserve our time and money. You're gonna rent a movie anyway, make it this one. More movies like this are certainly what we need these days!
2 comments:

We have entered the dog days of summer. I don't actually know what that means, but I think I sound smart when I say it. The next few days are supposed to be hot in MN. That means mid 90s with high humidity. It would not be so bad if either of our cars had working AC. The worst part of my day is driving home from work in traffic while sweating profusely. Heidi usually does not mind heat like that, but now that she is pregnant it bothers her. The ironic thing about this is that next month we are heading to Senegal to visit our team. In the hottest part of the year. We are so excited to see our team that I guess we will just find a way to deal with it. Details about the trip with be forthcoming, but we will be gone for almost 2 weeks. I just hope I don't melt.
1 comment:

The new Batman movie came with a lot of hype. Is there any way that a movie with that much hype can live up to it? On Saturday afternoon, Heidi and I went to find out. In my humble opinion, it more than lived up to the hype. The Dark Knight is awesome. Comic book movies are seldom this smart and certainly not as well done. The entire film I was on the edge of my seat, caught up in the intensity. Just as a warning, it is dark and intense all the way through but the violence is bloodless and the scariest stuff is implied. Heath Ledger’s Joker was incredible. Denying the audience a back story on the Joker was a great move and made his character even more menacing. At two and a half hours, the movie could have been trimmed down a bit, but that is really the only thing I could find to complain about. Leave the kids at home for this one, but The Dark Knight is the best movie of the summer and possibly the best comic book film of all time.

Great line: Lucius Fox: Let me get this straight. You think that your employer, one of the richest men in the world, is spending his nights running around the city beating criminals to a pulp with his bare hands? And your plan is to blackmail him? Good luck with that.
1 comment:

Rollergirls on the Greenway

On Tuesday night, Heidi and I took a walk on the Midtown Greenway. We often see unique/strange things while walking on the Greenway and Tuesday night was no different. The first odd thing was a group of Rollergirls. It was a group of women, and a man who appeared to be their coach, on old school rollerskates cruising down the Greenway in single file. They all had colorful clothing, 1980’s style tube socks, and moved at a pretty good pace. The next odd thing was a group of kids in their early teens that appeared to be acting out some kind of Fight Club. (If you’ve seen that movie, you can probably picture it.) There was no actual fighting, just boys talking big and challenging each other. When we walked back to where they had been, no one was there. We did not call the police since they seemed more intent on challenging each other than actually fighting. The last odd thing was a guy on a huge Unicycle. He was moving really fast and the wheel was about twice the size of a normal Unicycle. He appeared to be enjoying himself. Ah, the things we get to enjoy living in the city.

I played the new Disc Golf course at Minnehaha Falls yesterday with Nic, Jer, Peter, and Eric. It is the easiest course I have ever played, but we had fun. I had two terrible holes, but still finished at -2 after 20 holes. That’s how easy that course is. I would like to play it again.

Heidi and I were happy to welcome back our friend Peter Bodurtha (I may have spelled that wrong) back from his ten month stint in Russia. He and his fiancé, Julie Grazier, joined Heidi and I for Thai food last night. We went to Chai Thai, a tiny restaurant in the Cedar Riverside area, near the Metrodome in Minneapolis. The place was nice, the company was excellent and the food was good. In my quest to find the best Pad Thai in the Twin Cities, I give Chai Thai a slightly above average grade. The service was great, the food quality was good, but the amount of food versus the price was lacking. I don’t like feeling hungry when I finish my meal and that is what happened. No one else seemed to have that problem, so maybe I eat too much. Anyway, we are glad to have Peter and Julie (Petulie) back and are excited for what will surely be a memorable time when they get married next month.
1 comment:

Once again, I am running a bit behind on posting pics of all our adventures, but here's a few to satisfy the masses or whoever it is that actually reads our blog!! 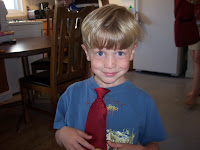 Our nephew, Carver, in his clip-on tie for church!
Sadly, he took it off right before wegot to church. 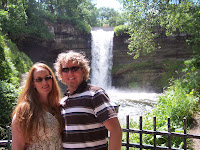 Us at Minnehaha Falls. It was a beautiful day. 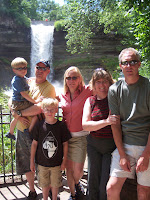 Everyone who was visiting us :) 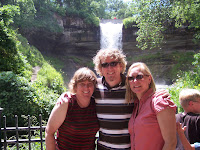 Tim and his sisters. The sibs.

We had a great time that day, got some Chipotle after church and everyone ate their ENTIRE burrito! It was a sight to behold. I was rueing that decision later on, but by then it was too late. We hiked around a bit at Minnehaha, got a bit muddy, but enjoyed the georgeous weather. Played at the park a bit and got ice cream for dinner :)

Last night Heidi and I spent some time with our friends Andrew and Sarah and their cute, happy, baby, Ezekiel. They are friends from church who live in intentional community in a house not far from ours in South Minneapolis. They live with two single people and a married couple and are part of a loose association of other similar houses where people live in similar fashion. They see intentional community as more than simply living in a structure with people, but also sharing their lives with them. It is a counter cultural idea that goes against American ideals, but I like it. After dinner, we joined them at a meeting of other like minded people where there was fellowship and discussion about how to live and share lives with people in community. There were lots of dreadlocks, body piercings, and tattoos (making me feel very preppy in comparison) and we enjoyed our time with them. Most everyone lives in our neighborhood and it was great to know that there are people like them all around us. Many of them attend a church called the Salvage Yard, which I had never heard of before last night. We got some great ideas for our house and some fantastic leads on people to live in our place.

Right before dinner last night, Sarah went out in their back yard and returned with three eggs. Joking, I asked her if she had chickens in their back yard. She replied that, yes, there were four chickens in their yard. Of course, then I went out and saw them for myself. I am not used to seeing chickens in our neighborhood. Later, at the meeting, a woman offered to share her knowledge of “urban chickenry” to anyone who wants to learn. I guess it is what it sounds like. Maybe someday we will participate in “urban chickenry”.

Since this post is about living in community and how we plan to set that up for our house, it is probably clear that we are taking our house off the market. We did not want to go with property management, but selling our house involved losing a lot of money and that did not seem wise to us. We felt that the Lord released us from selling for the time being and are now actively seeking people to live with us until we depart for Africa. The downstairs tenants are moving out and we are moving downstairs. We intend to have a house where people desire to live in community and we will use a property management company when we leave for Africa. So, please send anyone our way who wants to live in community in the city.
No comments: