Back on the move

Well, once again we are dogsitting.  Tomorrow we will start a week in White Bear Lake watching the dogs of some people that are friends of friends.  They have a sweet house with a home theater and the location is much closer to my work, so that will be nice.  A little extra cash won't hurt, either.  At the end of August we may have another dogsitting gig in St. Paul and after that we don't have any planned.  Some day, when we have a place of our own again, we will stop dog/housesitting for all our friends, but until then, these times provide a nice break from living with the in-laws in outer suburbia.

Jackson is becoming more vocal all the time.  Instead of saying yes, he says, "yeah, yeah" very quickly and nods his head.  When he says no, it mostly sounds like an o without the n, but we get the point.  He is an opinionated child who knows exactly what he wants and is not afraid to ask for it.  (He must get that from his mother.)  Every day he learns something new and is such a fun kid.  We are so thankful to God for him.

My job continues to go well.  I learn something new all the time.  A week or so ago I decided that I need to better understand what it is like to be in prison, since I am teaching classes to people who were just released. I watched some videos from the discovery channel about prison, which helped a little, but mostly I have been asking the residents.  Some of the guys that have some hard time in federal prison roll their eyes at my questions, thinking to themselves, "how does anybody not know that?" but I keep asking anyway.  I have to remind them that is is normal to have NOT been in prison and not the other way around.  Lately I have had a few openings to talk about things of the Lord and that has been cool.  My job can be tough but I like it and every day I get a little better at it.  Hopefully some of the teaching sticks and these guys are able to make it back into society.

I would be lying if I said that I haven't been feel very discouraged lately.  Though it's been a year since we heard God say "stay," we have not truly been able to settle back into life.  We love my mom and dad and are SO thankful for them.  Without the blessing of being able to live with them, I don't know where we'd be right now.  Probably crashing on your couch or camped out in your driveway!
That said, their house doesn't feel like our home and I don't think we will ever truly feel settled here.  We still live out of boxes and that takes its toll after a while.  More than that, we still feel an empty place where a dream used to be.  Healing from a broken heart takes time.  This is a process I am learning well and no matter how I feel,  with a little one at my heels, I still have to pull it together and get through each day with a smile.
Tim and I recently listened to a good sermon on choosing to rejoice when you don't feel like it.  The speaker gave the Hebrew definition of the word rejoice, which basically includes the physical actions of smiling, jumping and spinning.  It's challenged us to make that choice to rejoice even when we don't feel like it.  So we have decided that we are going to have a family dance party EVERY night until we get our breakthrough.  Lately, we have been rockin' to the song with the chorus 'this is how we overcome'  (I can't remember the song name, but it's a good one.)  Jackson absolutely loves it and runs to the living room as soon as we say the words dance party, it's very cute.  We all smile big, spin, and jump around and it's been really fun.  Even if I don't feel like it, I always feel better afterwards.  And I find myself singing the song throughout the day, which is a great encouragement.
Tim and I are trusting God for some big things and are really praying that God would dramatically broaden our scope.  We know He didn't keep us back from Senegal for something less and we want to believe for something even bigger, more than we could ask or imagine.  But it's hard.  Anyone who tells you it isn't really, really hard is lying.  Seeking God for a God-sized calling is tough.  I cry a lot.  And I cry out to God a lot.  A lot.  Lucky for me, He is faithful to answer.  We may not have a new dream to fill our empty hearts yet, but we still have a solid grip on the "dream Giver."  And He is good.
So I end this post with a challenge for you.  Have you chosen to rejoice today?  If not, and you don't think you have the strength to do it alone, come on over and join our dance party.  It may sound cheesey, but there is power in praising God.  Check out the Psalms.

Still on the move. 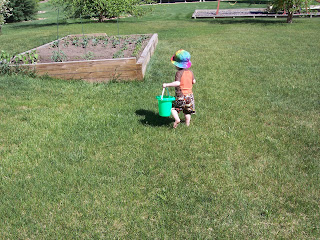 We finished our stay in North Mpls, returned to Rogers for Jackson to take a nap, and repacked for a weekend in Northeast Mpls.  The weekend of the 4th of July was spent doing a Stay-cation with our friends Peter and Julie at their house.  We ate a lot, Peter and I played some Disc Golf, and watched some episodes of the show Freaks and Geeks on DVD.  Never having done a Stay-cation before, we had a great time and hope to make it a tradition.  We then returned to Rogers in time for Jackson to take a nap, repacked, and moved on to White Bear Lake, to stay at the Showers house while they are visiting relatives.  My drive to work is short and we are enjoying their nice house and great yard.  It is getting a little old moving around all the time but we appreciate our friend's willingness to let us crash at their houses.  In a few days we will be back in Rogers for a while.  That will be okay, too.

I will add a couple pictures of Jackson, just because he's so cute. 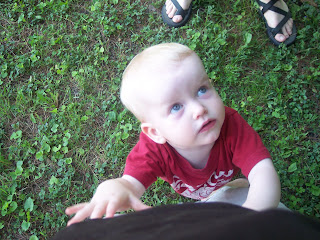