Television has become a wasteland. Reality television either brings out the worst in humanity for everyone to see or tugs on our heartstrings. Sitcoms are now mostly just attractive people cracking sex jokes to laugh tracks. (See Two and a Half Men and How I Met Your Mother. Also, I hate laugh tracks.) I cannot even begin to communicate how much I hate prime time game shows. (The contempt and disgust I hold toward Deal or No Deal knows no bounds. It glorifies greed and the objectification of women. It makes me sick.) Dramas are often trying to one up the others pushing the envelope of what you can show on Network Television. Fortunately in all the unoriginality and garbage there are a few shows that entertain me.

LOST and The Office are the best shows on TV. Nothing else comes close. Last season I started watching three shows that I was sure would be cancelled but somehow where not. Of course, that means they will be cancelled this season.

First we have Chuck. It is about a nerdy but likeable guy who gets all of the United States’ secrets downloaded into his brain. He is forced to go on with life as normal while two secret agents watch out for him and sometimes take him on missions. The show has a playful tone and the action is comic bookish in nature. I like the memorable characters and the geek inside jokes. Sadly I get most of them.

Next up is the Terminator: Sarah Conner Chronicles. This show picks up with the characters after the events of Terminator 2 and answers the question of why Skynet does not just keep sending back Terminators after one fails. (The answer is that they do keep sending them back.) This show is darker in tone and relies much more on action sequences than Chuck. There is a real danger to the characters since aside from Sarah and John Conner, no character is safe from death. Unfortunately, ratings are low and the Fox Network loves to cancel shows (see Firefly), so it will probably not last the season.

The third show is Life. I consider it the best of the three. It follows a cop, Charlie Crews, who comes back to the force after spending 12 years in prison for a crime he did not commit. Each episode he and his partner solve a different murder while Crews tries to figure out the conspiracy that led to his imprisonment. The acting and writing is great and I love the way Crews and Reese work together despite their personal issues.

Heidi and I almost never see a TV show on our actual TV. We almost always watch them on their network website or www.hulu.com. Feel free to comment on these or other shows worth watching.
1 comment:

The Denver Broncos got a huge break on Sunday, then took a huge gamble, and got a huge win. It was awesome. With less than 2 minutes to play, down by a touchdown, and one yard to go into the end zone, Cutler, the Broncos Quarterback, fumbled the football and a Chargers player recovered it. Everyone thought the game was over and the Broncos had lost, but the ref screwed up and gave the Broncos the ball back. Two plays later, Cutler hit Eddie Royal, a rookie receiver in the back of the end zone for 6 points. Most coaches would call for the extra point to tie the game and head into overtime. Not Mike Shanahan. He called for the two point conversion and the exact same play that just got the touchdown. A moment later Mile High Stadium erupted into cheers and the Broncos got the 1 point victory. I only got the see the end of the game, but it was amazing.

This morning I (Tim) drove across the new I-35W bridge on my way to work. Thirteen and a half months ago the bridge collapsed and 13 people died. The new bridge was finished three months ahead of schedule and it looks great. I drove across that bridge every day to and from work and had been on the bridge less than an hour before it fell last August. Life is fragile and we never know what will happen. I am glad to have the bridge back and a much shorter drive to and from work.
1 comment:

So it has been raining a lot lately and it makes me want to go camping. Not that camping is that fun in the rain, but apparently rain makes me want to be outside. It may be b/c Tim and I recently got a great deal on raincoats at REI and I have been carrying it with me in the hope that I will get stuck in a downpour and get to wear it. Well, this weekend, I got my chance! We had planned to hit up the Mpls Farmers Market on Saturday morning and go hikin later on. Lucky for me, it was raining all day! We donned our raincoats and headed out. It was great! We got a bit wet during the hike, but it was still fun and we got to break in our new gear. Sunday was a full day with church, our Barnabas Team meeting and an open house for a friend. Oh and a date night on Friday which ended at Peter and Julie's house. It was a full weekend, but lots of fun!
1 comment:

For those of you who are wondering if we are ever going to share more about our vision trip...it's coming! We promise. Most of you have probably heard the standard, it was hard, but good. We do have more to share, much more!, but I think we are still processing everything. God did so much in our hearts in that short two weeks and we are overflowing with thankfulness to God! We feel very different than we did a month ago, in a good way. Our vision for ministry has been clarified, our desire to get there has increased, and our passion for the Wolof has intensified. God has been faithful to us in the past week as we pray through what we experienced in Senegal. He is speaking to us and we are listening, making changes, and seeking His face. We cannot express how excited we are for this endeavor. But we are also more realistic now in what it will require of us once we get there, so we are patient as we seek God for preparation. Again, I thank you for your prayers and we do look forward to sharing more stories with you as opportunity allows.

A picture of our whole team
2 comments:

Well, still no luck recovering our pictures from the camera. So sad! We will keep trying, but it doesn't seem too promising at this point. The day our team went to the village, we took some team pictures of everyone in our colorful clothes. These aren't of the whole team, but you can see us in our booboo and haftan! I'm in the booboo, Tim's in the haftan. 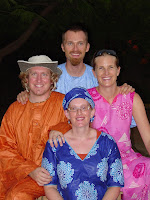 Here we are with Joe and Cara 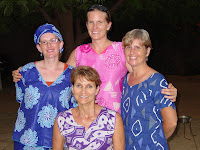 The women from our team.
Cara in back, Deb and I in middle and Iris in front. Great ladies! 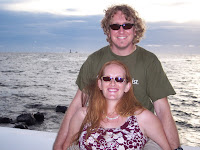 One night in Dakar, we went to a touristy area and had dinner on a point overlooking the ocean. This is the western-most point of Africa. We were as close to home as we an get and still be in Senegal. It was breathtakingly beautiful! 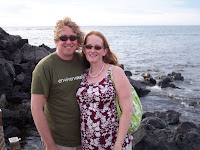 Right in front of restaurant.
Hopefully more pictures to come.....hopefully.
No comments:

I know that everyone is very excited about seeing pictures from Senegal....but I am at a loss. Sadly, all the pics I took found there way into a folder on my new memory card and I don't know how to access them. If anyone has any knowledge or tips for this, please let me know! Until then, we wait.

But here are some pictures of the weekend right before we left. A little reunion with my college roomies! Here is us posing with Sierra's lovely bags at Max's pirate birthday party.
Love those bags.