I (Tim) have not given an employment update in a while, so here it is.  Since September 1, I have been officially unemployed.  After a couple months of searching and a few interviews, I accepted a part time job at Costco and kept sending out resumes and interviewing.  I was at Costco as a seasonal employee for six weeks and then was let go, along with the other seasonal workers.  It was supposed to go for two more weeks, but the money flow was not enough to keep us.  Now I continue to job search and hope to find something soon.

I learned a few things working at Costco, which was the first retail job I had done since 1995.  The following  are a some of them:

-          - A big part of my job was to go around returning items that customers had left in the wrong spot.  They would decide that they did not want it and leave it in some other part of the store.  That drove me nuts.  C’mon, people.  Put your stuff back where you got it.  Especially when it needs refrigeration.  Don’t be so lazy.

-         -  I also spent a couple shifts collecting carts from the parking lot.  On Christmas Eve, I spent seven hours on cart duty in a snowstorm.  I got annoyed when people would leave their garbage in their cart.  There are no magic elves that go around and pick up trash.  It was me.  I did not want to do cart duty when I started but I enjoyed it more than I expected.

-         -  Most of my time was spent going around with a scanner to get info from the customer’s membership cards and convincing them to upgrade their membership.  As you can imagine, most people did not want to upgrade.  A few were jerks but that was the minority, fortunately.  I was good at it but never enjoyed it all that much.

-          - One woman got the award for jerky customer of the year.  When I was on cart duty in the handicapped section, I woman drove up to me and rolled down her window.  I leaned down and she asked me if we used all the handicapped spots, many of which were empty at that moment.  My response was that when the store is busy, all the spots are filled.  She said “hurump” or something like that and drove away in a huff.  Anyone who complains that there are too many handicapped spots is the jerk of the year.

I am grateful for the Costco job but I am looking forward to full time employment with something that fits my gifts a little better.  I appreciate your prayers and will give an update when I have any news.

We are constantly celebrating firsts these days, from baby signs and cute expressions to discipline.  Mostly fun things, though.  It was great to celebrate Jackson's first birthday even though he didn't really get it. 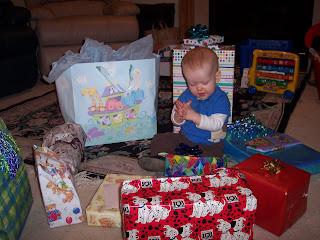 So many presents for such a little guy!  He really liked ripping the bows off. 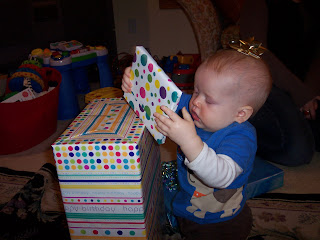 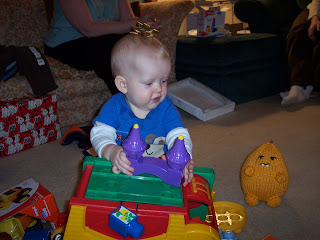 That little orange dinosaur is about the cutest thing ever and handmade by Jackson's special friend Marlyse.

Since we don't give Jackson any refined sugar (except for trace amounts) I made him a healthy rendition of some sweet potato pie.  At first he wasn't sure what to think of it, even though he loves sweet potatoes (who doesn't?!), but then he got into it. 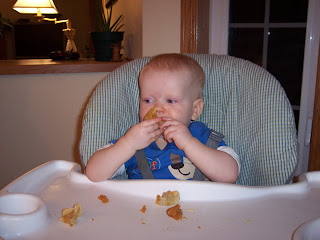 Not too much of a mess to clean up either, which was nice  :) 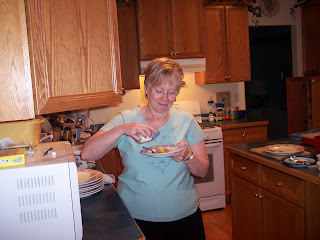 Jackson may have liked it, but Nana needed to add some sugar to hers...haha

Here's another one of our little man surveying the bounty on Christmas morning. 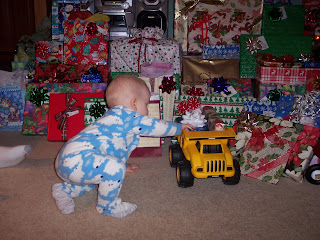 Life sure has changed a lot this past year, but Tim and I love being parents and can't imagine parenting a sweeter little person.  We look forward to growing our family, but aren't sure we'll get "so lucky" the next time around.  haha  One thing is sure, Jackson has brought a lot of joy this past year, especially on the hard days!  We praise God for him.

So who reads this anyway?

Tim and I ask this question all the time, who reads our blog anyway?  Sometimes blogging feels sharing your life with everyone and sometimes it feels like I blog and Tim reads it and that's it.   So if you read our ramblings, often or irregularly, drop us a comment to say hello.

This Christmas season was strange for our little family.  We were blessed to meditate on the birth of our beloved Savior, we got spoiled with lovely gifts and we enjoyed time with both sides of the family, but it was also a bittersweet reminder of where we are at.  We have never doubted our decision to stay and not go to Senegal, but we haven't yet reached the point of being happy to be in MN.  We are still sad.  And if you catch us in a moment of vulnerable honestly, we don't FEEL like we have that much of a life here anymore.

Even though we figured it was a pipe dream, we were hoping to be out of Mom and Dad's by Christmas.  We love my parents, but living with them is certainly not without it's challenges.  I especially crave a place that I can make into a home for my family.  Most days, we feel rather homeless, unsettled and directionless.  However, God is SO good and we are able to whole-heartedly praise Him daily for His presence and faithfulness in our lives.

I think we could use a break.  Sometimes a change in scenery does a world of good.  In August, the three of us went camping for a couple days and it was really refreshing.  Some of you have been consistently offering your homes, it just hasn't worked out yet, but THANK YOU!  We have appreciated your offers SO much.  (I thank you assuming you read our blog......)  Since Tim wasn't asked to stay on at Costco, we have lots of time on our hands again.  So if anyone is going to be out of town for the weekend and we could "do you a favor" by watching your house or something, let us know.  We are really good at watering plants :)  haha  Or maybe you know someone with a year round cabin that might be available for our use, let us know.  Thanks friends.
19 comments: