Today is Jackson's first Halloween. We are not fans of Halloween but we are big fans of costumes and free candy. We'll post Jackson's costume picture when we get a chance. He's pretty cute. We intend to take him Trick or Treating but only because we would like to meet the neighbors on our block. It's too good an opportunity to meet people to pass up. Since we do not know how long we will be living with Heidi's parents we thought we should meet some neighbors. Later on we will head to Chipotle for free burritos. Mmmm. Chipotle. Mmmm.

This week I interviewed for a job that would have been an excellent fit for me but I was not selected for the second round of interviews. After feeling sad for a few days I am again feeling hopeful for the future. Job searching is not fun at all but I must continue. Thanks to everyone who prayed for me when I had the interview. I am confident that something will come along. God did not leave us stranded. He'll take care of us.

Jackson can sort of crawl now and is good at finding the remote control. He is 100% boy. I sure do love him and Heidi.

Here is a bonus picture of Jackson. He loves the Denver Broncos. 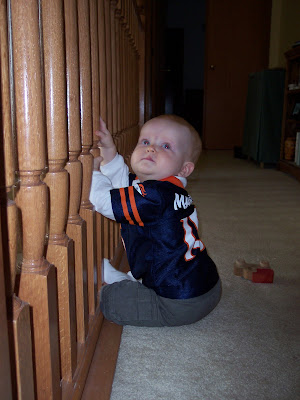 Tim has a job interview on Monday for a job he's actually interested in! If you could pray for him, that would be great!
No comments:

Last night Tim and I got to go on a date!!!! A date! We don't get those very often and it was much needed. We had a great time and it reminded me of the "olden times" when we got to go on fun dates all the time. I fear we took those days for granted.....We went to dinner at Chili's and got 3 courses for $20, pretty good deal. It was WAY too much food though. We wanted something ethnic, of course, but we live in the suburbs now, so Chili's was fine. haha We had fun just talking and catching up, running around, being silly, it was really fun. Love you, babe, glad I married you! 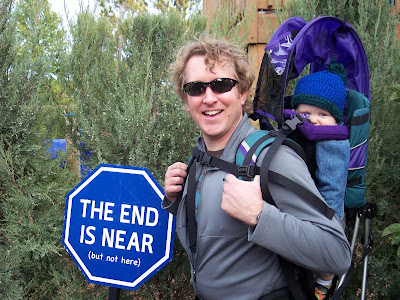 Last Sunday, we went to the MN Landscape Arboretum with some of my friends from college, it was a beautiful day for it. 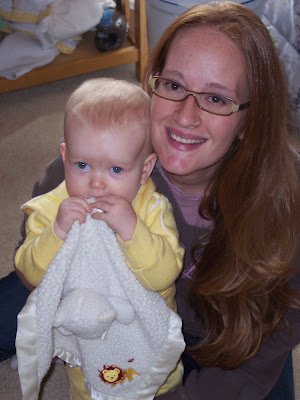 Jackson has been getting a lot of use out of all the clothes that my mom kept that my little brother wore when he was a baby in the early 80s. Here's a sweet little track suit that I just love. He also gets a lot of wear out of the clothes that my grandma made for Dan, can't believe she sewed all that stuff....Thanks for keeping this stuff Mom! 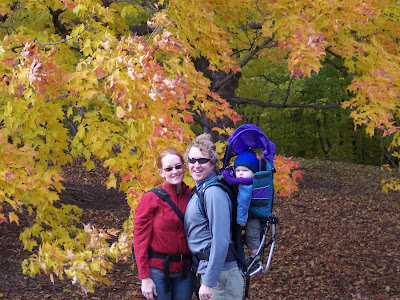 A family photo at the Arboretum. 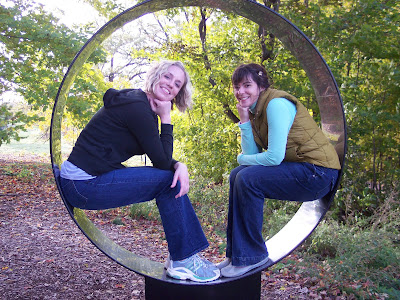 I mentioned a couple weeks ago that I had a job interview with Volunteers of America. I found out yesterday that I did not get it. That is the second time in my life that I have interviewed for a job and not been offered the job. I guess I am fortunate that it has not happened more. So, I am keeping my head up and am applying for new jobs every day. My faith that God will provide is still strong and He often provides in ways that cause our faith to build in the process. At the same time that I am not getting paid, our duplex has an empty unit. We are living with Heidi’s parents and our expenses are low, so we will be okay for a while. Despite the fact that we have no money coming in and lots going out, neither Heidi nor I are stressed about it. As trite as it sounds, all I can do is trust God and work hard at finding a job. Why worry about anything else? This does not come easy to me. I have to return to Matthew 6 and the words of Jesus to seek first His Kingdom and His righteousness. That’s what matters. Even if we had no earthly possessions, we have God and that is enough. We will be okay. That said, we covet the prayers of our friends and family for a job and renters for the duplex. Thanks.

On a far less important note, I sure am enjoying the Denver Broncos season so far. You can’t get better than perfect, with five wins and no losses so far. Monday night’s game with the Chargers is big. The Broncos win this one and the division is pretty much a lock. Go Broncos!

I sure do love Heidi and my sweet little guy. Jackson just gets cuter and cuter every day.
2 comments:

Obedience is better than sacrifice

Last year I was a part of the mom's group at our church, which was great, but this year they switched it from Friday morning to Thursday night, making it a lot harder for me to get to. I was feeling really sad for myself and was praying for another outlet to connect with God and other moms that was during the day. Lo and behold, my God provided and I was invited to join a mom's group that was birthed out of a group of friends that Tim went to college with. It started out as a guy's Bible study about 10 years ago, then it was a co-ed Bible study based out of Woodland Hills and a few years ago came to include a weekly mom's group. It has also provided Tim with a part time job! While we meet upstairs, Tim gets paid to watch the kiddos downstairs :) Super cute. He gets Dad of the Year for sure!! Only 1 or 2 of the little girls are scared of "Mr. Tim."

We have only met 3 times, but I love it. It's a really neat group of 9 women who truly love the Lord and are passionate about Him, which leads them to being passionate about healthy marriages and healthy families.

We are reading through a book together and this week's chapter brought us to 1 Samuel 15, which REALLY blessed me. Through the voice of Samuel, God told King Saul to destroy the Amalekites and everything that belongs to them. Everything. Seems pretty clear, right? Well, apparently, not to Saul....he spared King Agag and the best livestock. The Lord was grieved over Saul's inability (or unwillingness) to follow His instructions and here's where it gets funny. So Saul says to Samuel (probably with a big grin) ' "I have carried out the Lord's instructions!" baaa, baaa....' Hm, is that a sheep I hear???? A sheep that you were supposed to destroy...interesting. Even though Saul intended to use this choice livestock as a sacrifice to God, God was NOT pleased and told him that obedience is better than sacrifice and rebellion is like the sin of witchcraft. Strong words.

I get encouraged from this as I see such a prime example of how seriously God takes our obedience. By staying back from going to Senegal, Tim and I have been obedient to God and we believe that He will bless that. It was a salve to my hurting heart to see confirmation of that in Scripture. We could have acted under a similar motivation as King Saul, acting out of sacrifice to God. We knew there would be sacrifice involved in serving overseas and we were ready for that. But there was something else God desired more from us than that sacrifice, and that was obedience.

Although the dust has settled and most people are used to the news of us not going anymore, Tim and I continue to press through the thick fog of what that means for our family now, practically speaking. There is still much healing to be done and we so thankful for a God who speaks to us often by His Spirit and through His Word.

Does the Lord delight in burnt offerings and sacrifices as
much as in obeying the voice of the Lord?
To obey is better than sacrifice,
and to heed is better than the fat of rams.
1 Samuel 15:22
2 comments:

Since my last post I have a coupe updates on my job search. A week ago today I interviewed to be a substitute teacher at a small Christian school about 15 minutes from Rogers. The woman liked me and now I am waiting for the paper work to be completed. If I can get a day or two a week, that would help offset some of our costs in the short term. On Thursday I had an interview for a full time job with Volunteers of America at their affordable housing complex in downtown Mpls. I am supposed to find out at the end of this week if they have chosen me. It's not my first choice but I think I would like it. 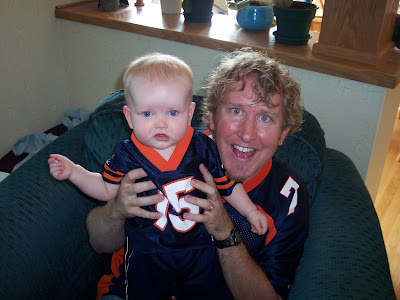 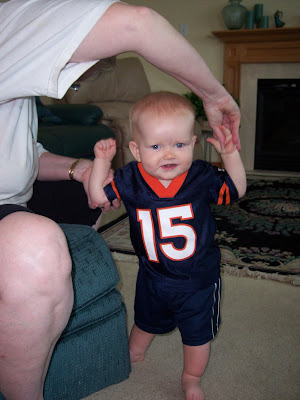 Jackson got to enjoy his first few Broncos games in his Brandon Marshall jersey. (Thanks Kyle and Mandy!) He is a lucky football fan. His team has not lost yet. Against all expectations, the Broncos are 4-0. Go Broncos!
No comments: