We hope you had a great Christmas! There is nothing more wonderful to celebrate than the birth of our Savior. Ours was a little bittersweet, being our last with family for a while, but we had a great time. 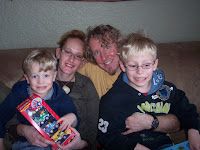 We saw Tim's sister on Christmas Eve, here's us with our nephews, and then Tim drove them to the airport as they were off for Arizona to see Kent's parents. Doesn't Arizona sound nice right now? 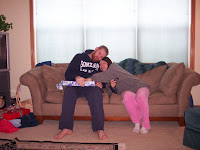 Here's my brother and his wife, Ellen, on Christmas morning. After a delicious breakfast of belgian waffles, my parents spoiled us yet again, it was great. 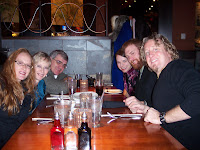 We pretty much laid around for 2 days, played games, watched movies, it was great. Although Tim still went running each day. Good job, babe! Then we ventured out for dinner at P.F. Chang's and then on to see a Christmas Carole at the Guthrie. Kinda fancy for folks like us, but we had a really great time and the show was wonderful. The new Guthrie is pretty much amazing! Although I think they made the seats to fit tiny little elves..... 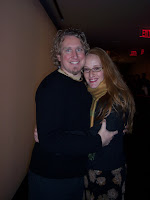 Us at the Guthrie 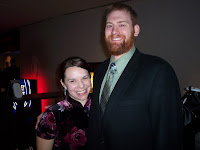 I, Heidi, am going to my dentist again tomorrow, Thursday at 1pm, so he can make some more adjustments to my splint and see if we can fix the pain I'm having. We have determined that the headaches I get tend to start in my jaw. Since I received a prophetic word about a year ago to go see this dentist, I've been seeing him for about 10 months and we've tried 2 splints. Please pray specifically for these things:
Recently, a friend recalled a story about his wife's physical healing. When she asked people to pray for her she said, don't pray for grace and strength for me to get through this, b/c God is already going to give me that. Pray for complete and miraculous healing and have faith for it.

I would ask the same of you, my dear friends. God has given me tremendous grace for 4 1/2 years and He will continue to do so. Please pray for a physical completion of what He did for me on the cross. My Heavenly Father divinely led me to this dentist and I would love for this to be a testimony of God's power and faithfulness to Dr. Chad and his staff. And I don't want to be in pain anymore :)
No comments:

And then there were three... 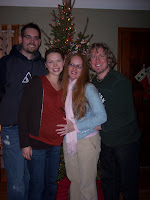 Our friends that we live with, Phil and Emily, are pregnant and last Saturday was Emily's due date. Here is the before picture. This morning/afternoon at about 12:06pm they headed off to the hospital to have baby Carlson!! We are so excited for them and can't wait to meet this new little person. Please pray for a safe and speedy delivery and that Phil's cold will quickly dissipate. So excited!!!!
No comments:

My Denver Broncos stunk the place up something fierce last night. It would have been an even worse experience if not for Grant and Jen’s hospitality. (Dinner and dessert was great. Thanks, Jen.) The Broncos were clinging to a faint hope of the playoffs with a win, but came out flat and uninspired. The Texans pushed around the Broncos offensive line while sacking Jay Culter at least 4 times, the Broncos had almost no pass rush and could not stop the run, and the special teams constantly gave the Texans a short field and the Broncos a long field. Only Brandon Marshall and Jason Elam gave the Broncos an outstanding performance. Cutler was not bad, but he never had time to throw since Mario Williams was on him all night like ugly on a Raiders fan. With two games left against teams bound for the playoffs the Broncos are likely to finish with the 3rd losing season since I was in high school. At least it will all be over soon.

I have been processing the Sunday murders in Colorado and still cannot wrap my mind around those events. Heidi and I have loose associations with both YWAM and New Life Church and it just does not seem real. My home state has seemed like a magnet for evil in the last few years (the Chuck E Cheese shootings, shootings at Columbine and Platte Canyon high schools, and Sunday’s tragedy.) Any wisdom that people have for me would be appreciated.

Someone is still interested in buying our house. Thanks to everyone who has been praying and please continue so we can move that bad boy and get to Africa!

Heidi sure does look cute when she is making Christmas cookies!
No comments:

When I said this was the year of the Christmas cookie, I wasn't joking. Marlyse and I whipped up some "Mom Bars" (remember those, college roomates??) and some of her mom's famous pumpkin cookies. They were delicious! And we had a great time baking. 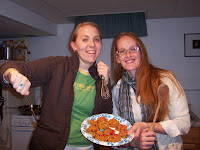 I wanted to give a shout out to the cookie of the evening from our cookie-baking night. Candace's cookie wins, although it was a tough competition. And to be fair, no one knew it was a competition! Hers was a chocolate cookie with a Rolo inside and drizzled with white chocolate. Amazing . Nice work, girl. 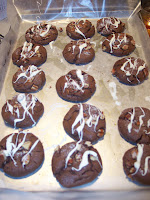 In a lost season, the Broncos put forth another shameful display of inept football. As a lifelong Broncos fan, I have been spoiled by teams that win much more than they lose. I am also spoiled by Shanahan’s record against the Raiders at 20-6. Even in lean years I could count on the Orange Crush to take it to the Raiders. This season, for no good reason, the Broncos are stinking up the place. Each time I give up on the season, which has been several times now, they win and give me hope, but soon after they dash it. I will watch a couple more games before they end the season with a 7-9 record and a high draft pick. Maybe they will hit the jackpot in the draft and have some good players for the future. Yes, there is always next year.

It is time to give a shout out to the Alma Mater. Bethel University had a great showing this fall in both Cross Country and Football. My love for CC at BU runs deep since I was a member of the team for three years. I was excited to see high finishes for both the Men and Women’s programs at the conference and regional meets. Even more, BU had a total of four All-Americans, two men and two women. That’s awesome. BU football, a more high profile sport, has been incredible. They are playing the perennial powerhouse, Mount Union, in the NCAA DIII tournament final four on Saturday. BU’s coach, Steve, is a great guy and I am glad for him and his boys. I hope they win on Saturday, but even if they do not, it has been an amazing season.

Winter has finally come to Minnesota. We got about six inches of snow on Saturday and the high temperatures are in the teens. This morning when I went out for my run, it was about 3 degrees. As we say in Minnesota, there is no poor weather, just a poor choice of clothes. We will be choosing our clothes wisely for the next couple months.

Heidi looks cute even in the many layers she wears this time of year.
No comments: