Five Thing You Learn When You Are Colorblind 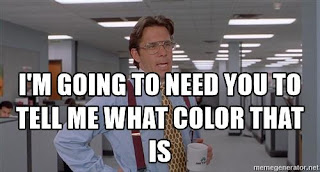 As far as disabilities go, there are many that are far, far worse than being born with colorblindness. It falls mainly on the level of annoyance but it does change how one lives life.

Colorblindness in women is extremely rare but, strangely enough, the genetic trait comes through mothers. I have three sons who are not colorblind while one of my sisters has two sons who are both colorblind and another sister has one son who is not. If Agnes has a son, it is probable that he would be colorblind.

Here are five things I have learned going through life with colorblindness.

1. I have been answering the same question over and over again my entire life. When I tell someone I am colorblind, before they can respond, I always tell them the same exact thing. I say "I am red/green colorblind. That means I cannot see all of the colors on the red/green spectrum. It's not like I see the world like a black and white television, I just can't see certain colors. It's kind of like you have the box of 64 crayons and I only have 12." Every single time, the person looks at me for a moment then points at an object and asks "what color is that?" I then give the same response I always give, "It's (whatever color), I can see colors, just not all of them. If I can't see  a color, I don't always know I can't see it." Then they always pause and point at another object and ask "so what color is that?" At that point I usually say "it's (whatever color), I think. I don't actually know." That is usually enough to satisfy them and the conversation moves on.

2. Some careers are unavailable to people who are colorblind. I have a friend who joined the Army and his colorblindness meant that he could be a medic or a Chaplain's Assistant, but all the other jobs were unavailable to him. I cannot be an electrician or graphic designer. Working in a clothing store would be challenging. In some cities I could be a police officer and in others I couldn't. I can never be a commercial or military pilot. With help from technology, people with colorblindness can be housepainters but they still have to be careful not to mix up the colors.

3. I cannot match clothes and that has led to interesting responses from people. Usually someone would say something like," that's an interesting color combination." Then I would have to explain that I am colorblind and have the conversation laid in point #1. Before I got married I had to rely on roommates for help. I would often ask friends or relatives to show me clothing combinations that worked and I did not stray from them. Much of my wardrobe was black and grey. If I needed to dress up, I wore a white shirt with a tie so that I wouldn't have to worry about it. One time in college I was eating lunch with a group of friends and one of them commented on my pink shirt. I asked what he was talking about since I was wearing a white shirt. Everyone at the table then told me that it really was a pink shirt. I had been wearing it regularly for quite a while without knowing it was pink. Whenever I talk to someone else with colorblindness, they almost always tell me that something similar happened to them.

4. I ask for help a lot. I used to remind my friends that I am colorblind and if they see me wearing a bad color combination, they should tell me and not worry about offending me. I often ask sales people at a store what color something is before I buy it. The only downfall of that is having to start the "what color is this?" conversation. Any time something is color coded I have to ask for help, even if I am pretty sure I know what color it is. After a few mistakes, I've learned to just ask. It's humbling to ask for help for something that most children can do with ease.

5. The frustrating part of being colorblind is not knowing when I don't know something. Since I have never seen the colors that I can't see, I don't know when I make a mistake with colors. The stakes are pretty low and I have found ways to cope but sometimes I wonder what I am missing. I have heard about glasses with special lenses that fix certain kinds of colorblindness but since my kind is so rare, I doubt they would work for me. Maybe someday I will try them then write an article about it.

That is my experience with colorblindness. If you have a friend that is colorblind and he's wearing a strange color combination, now you know why. Unless he's a hipster and then all bets are off.