This post is a long time coming, but here it is, so that's what matters.

For the past 7+ years, Tim and I have been blessed by a great prophetic ministry called Harold Eatmon Ministries International (HEMI).  We have had the privilege of attending 3 sessions of School of the Prophets and have learned SO much about how God works through prophetic gifting in biblical ways.  The last school we attended was early this year and it was pretty sweet.

Towards the end of our sessions on Saturday afternoon, we moved into a time of activation, a time to "practice" what we learned in a safe and orderly environment.  So far the activations all weekend had been pretty painless, not too scary, just a chance for everyone who wanted to to offer themselves to the Lord to be used prophetically to bless another.  It was very cool to see people experience the joy of being used by God to prophetically speak truth and encouragement to one another.

Well, the last activation was definitely a little scarier than the others b/c we even didn't know what it was when they asked for a few volunteers.  You should know that I don't like being "up front" (ever, never ever, no matter what), but I also knew in my spirit that God was asking me to make myself available to Him, to raise my hand and volunteer.  I think the exact words He used were, "If I want to use you as My mouthpiece, who are you to say no?"  To that I said, okey-doke, and my hand went up.  I knew if I volunteered, I would be chosen, and sure enough, my hand went up and Joe called me up front.  They had set up 8 chairs on the stage, in two rows, facing each other.  I sat down and waited as the other chairs in my row were filled up.  Then came the blindfolds....

They blindfolded us and then silently chose 4 people to sit across from us.  We were to prophecy over the person sitting in the chair directly in front of us.  If we felt confident enough in the gender of the individual, we could include that in our word for them.  Well, I will give you one guess as to who got to go first.  You guess it, me.

Joe handed me the microphone and told me to take my time.  I would like to insert that there were probably at least 100 ppl in the room - yikes.  At least I couldn't see them!  I would also like to say that this is an anointed ministry and dozens of very anointed, very prophetic people were there that weekend.  And they were all praying for me, all praying that God would give me a powerful word for the person in front of me, for their benefit and for mine, that I could be blessed by the opportunity to be used of God in this way.  So really,  there was such a powerful anointing present that anyone could have prophecied in that setting!

I won't bore you with the gory details of the word I got, but I will tell you that the experience was amazing.  God gave me a specific and detailed word for the man of God that was seated before me and I pretty much wept through the delivery b/c of how moved I was at the Lord's heart for this man.

After the 4 of us in my row had all given a word, we were able to take off our blindfolds and see who we had ministered to.  To top it all off, the person sitting in front of me was my brother!!!  Wow.  There are no words.  Amazing.  God showed up and I was blessed to be there and be a mouthpiece for Him. 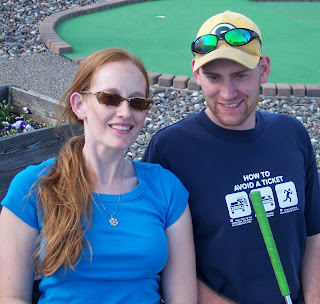