Heidi and I are big on nicknames. We rarely ever call each other by name and almost never call the boys by their actual names, except sometimes in public. There are people we know who don’t like using nicknames and only call their children or spouse by their given name. If that is what they like, that’s cool, but Heidi and I roll with nicknames. Jackson is mostly called the Pookie or sometimes just Pook, but he used to be called Baby Jack, a name given by his then four year old cousin, Carver. He is also called ribcage (he hates eating dinner for some reason and is a skinny little guy) and other random names that don’t typically stick for long. Beckett and Theodore are certainly not immune to nicknames. I call Beckett Baby Beck or just Beck most of the time but he also earned the name Butterbean because he was so chubby before he started crawling. Somewhere along the line Heidi called him Pfeffernusse, which is a german cookie, and that name stuck, too. Most nicknames don’t make it outside of the family but Theodore is known now to many as T-Bone. It’s funny to me when a friend or family member calls him that. It seems to fit because he is mostly bald and stocky and seems to have a high pain tolerance. The same thing that would cause Beck to cry does not phase T-Bone. I wonder what other names we will come up for with these little boys.

The twins are officially crawling and can stand and even walk a little holding on to objects like the couch or chairs. We are excited to see them grow but as they have become mobile our lives get a little more stressful. Baby gates have gone up around the house and we have to keep an eye on T-Bone who likes to wander into the bathroom and close the door on himself and play in the toilet. So far there have been no real injures we have to be constantly vigilant. We love our twins but they sure are a lot of work. 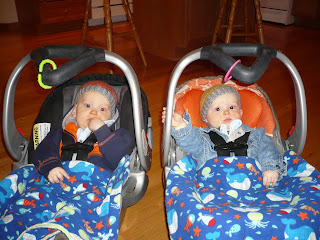